Last, but definitely not least...Rosi Robinson!


Rosi Robinson is a batik artist, teacher, lecturer and author. She has been featured in many magazines including Artists & Illustrators, Craft & Design and International Artist and has written three books on batik. 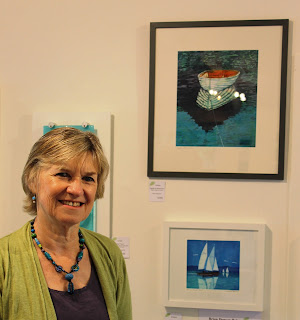 Rosi was born in Edinburgh and studied history at Vassar College in New York. She taught for 43 years and was Head of Art at Cumnor House School for almost 28 years, before retiring in 2013. She now lectures and gives batik workshops throughout the world.

Rosi's travels to the Far East, Europe and North America have influenced her subject matter, which includes land and seascapes, portraits and sporting scenes. 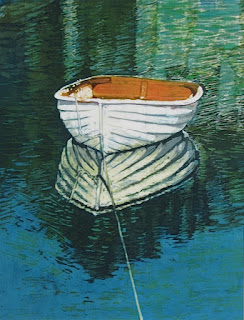 Her batik pictures are principally figurative and look like watercolour paintings but she also enjoys experimenting with wax and dyes, developing ideas in more abstract ways on cotton and paper.

My Time At The Gallery: Emily O'Shea 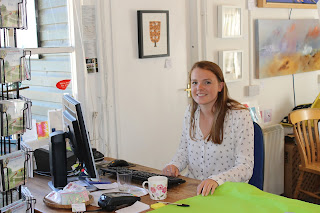 Over the course of this summer I have had four days of work experience at The Green Tree Gallery, and I have extremely enjoyed my time here. The ladies that I have been working with and the customers have all been so welcoming that I would definitely love to visit again in the future.

At The Green Tree Gallery I have been allowed to work in a variety of different areas. I was able to aid in customer service in which I really enjoyed interacting with buyers and discussing their own artistic interests. I was also able to create different displays of artists work and understand how to attract the eye to certain pieces using different heights and dimensions.

Following this I began looking into the online media of the gallery. I was able to photograph pieces of artwork and then to edit them before writing a post and uploading them to Facebook. My experience here as allowed me to gain an insight into the amount of work that is required to run a business such as the gallery, which I feel will be extremely useful in my future.

I have really enjoyed exploring the array of artistic techniques used by the artists which has really inspired me to experiment with different art methods in my own work. I also really love how the gallery appeals to a range of different people from young children to eager art collectors through the range of interesting pieces displayed.

An artist whose work really stood out to me was Grant De Jonge (seen to the right) who creates beautiful landscapes of brightly coloured skies using a very interesting abstract technique with oil paints on canvas. The rough bursts of colour have really inspired me to try and use more effortless techniques and possibly explore some more landscape work, as well as practicing my oil painting.

The work by Rosi Robinson (seen to the left) also really caught my eye, as I have experimented with batik techniques before, creating large floral patterns, but have never seen such beautiful and intricate batik paintings as these. They have been created with amazing skill and are made with stunning colours. This has again inspired me to practice more techniques such as batik to broaden my artwork.


The exhibition “Reflection” has interestingly brought in a great deal of glass work to the gallery. I love how these pieces have been reflecting through the summer sunshine and really brightening up the gallery.

I have really enjoyed my time at The Green Tree Gallery and have gained such a great experience working in the art industry and having done so in such a lovely environment.

A pair of painters: Paul Guthrie and Annie Vince

Our exhibition "Reflection" features paintings by two artists who are both self-taught: Paul Guthrie and Annie Vince.

Paul says he "didn't find out" that he was an artist until six years ago, at the age of 37.

It started when he painted "Cows, Red Background" and hung it on the wall at home. The astonished response of his friends set him on an unstoppable trajectory. 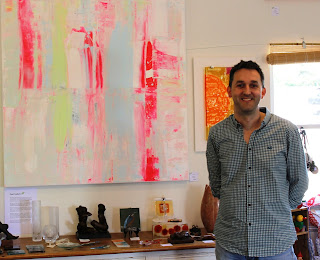 "The only way I can express it is to say that I can't avoid painting," he explains.

Unlike his painting in the exhibition, "Abstract I", Paul's subject matter is usually birds and animals. He is driven to convey in his work the nature of a living subject, its essential character.

"If a sheep looks like a fleece stuffed with old farm implements, then that is what I must represent," he says.

He uses eye and camera to capture the personality of what he sees and then works with bright, vibrant colours to convey that personality in as truthful a way as he can. His way of working conveys the reality of a subject more fully than any factual or naturalistic representation can.

Paul aims for a strong response to his paintings. "My hope is that the viewer takes something new from a painting every time they see it."

Annie Vince's interest in art started about 20 years ago when she learned to paint. Although she experimented with most media, she found that acrylic and oil suited her best. 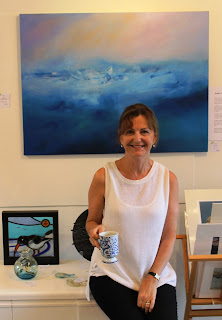 "I started to focus on abstract painting, first on paper with oil and now on large canvases," says Annie, who was born in France but now lives in Hampshire.

"I like using vibrant and vivid colours with bold strokes, always trying to produce a dramatic atmosphere with lots of movement."

"I begin by picking up a line, then by adding colour and texture, the painting develops naturally," she says. "I always have a palette in mind before starting painting, which I apply freely at first. I then introduce some structured lines." 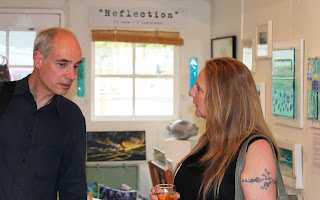 Metalsmith Simeon Smythe and glassmaker Stephanie Else met at our launch party for Reflection and spent the afternoon comparing notes on working in their respective media. 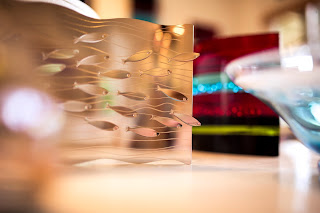 Simeon studied three-dimensional design at Brighton Polytechnic, where he worked in wood, metal, ceramics and plastics before choosing metal as his main material in the final year. After graduating in 1986, he set up a workshop and started producing his own designs in metal. 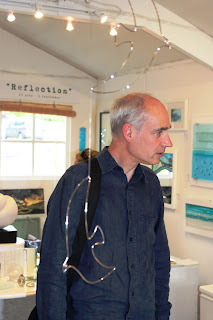 "The inspiration for my work comes from nature, architecture and geometric forms," he explains. "I often get ideas by working directly with the metal using a combination of machine and hand tools."

The main metals Simeon uses are copper and brass and the finished pieces are either commercially plated or individually patinated using chemicals.

Stephanie is self-taught. Having "worked and played with glass for many years", she uses a variety of kiln-forming and glass-fusing techniques. She works with a combination of both transparent and opaque glass, adding metals, foils and lustres to produce both decorative and functional works of art, jewellery and gifts. 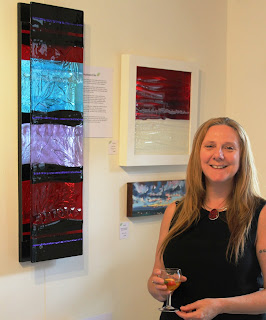 Like Simeon, Stephanie finds her inspiration in nature and the world around her, as well as in the glass itself. She says she "never tires" of experimenting and exploring new techniques.

"I enjoy the unpredictable nature of my work," she says. "Never knowing exactly what a finished piece will look like when it comes out of the kiln...and the fact that no two pieces can ever be the same!" 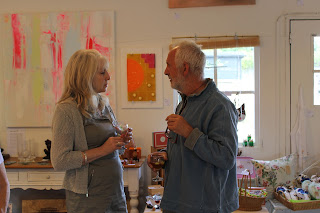 Sussex Guild members Brian Denyer-Baker and Deborah Timperley are both exhibiting with us for the first time: Brian is a print maker whilst Debbie is a Glassmaker. 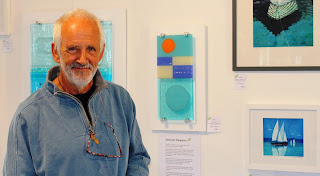 Brian studied Fine Art & Design at Brighton College of Art, where he learnt the skill of etching under Raymond Cowern RA RE, and went on to study at the Royal College of Art.

His career has embraced teaching Art & Design as visiting tutor at Harrow and Wimbledon Schools of Art and later at West Dean College. As a freelance design consultant and illustrator, Brian worked for many large companies, including Shell International.

He has work in private collections throughout the UK, the Middle East, Europe, Australia, the United States and Japan. He has exhibited in London at the Royal Academy Summer Exhibition, the Mall Galleries, New Grafton Gallery, Llewellyn Gallery and Eastern Rooms, Rye.

He is a regular exhibitor at Henry Paddon Contemporary Art in Eastbourne and with the Sussex Guild at exhibitions throughout the county. 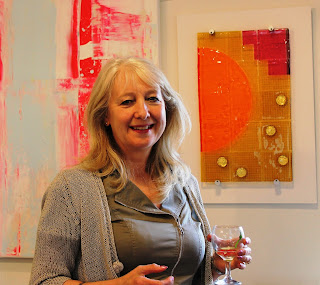 With a workshop on the Borde Hill Estate, Debbie is as local as can be although she has exhibited widely in Europe, showing in Germany, Lithuania, Switzerland and Belgium!

She has been selected several times for the British Glass Biennale and also shows at craft events such as Art in Action in Oxfordshire.

Her sculptural pieces are a combination of technical mastery employed to convey an idea whilst others are a more literal evocation of landscape. More functional work includes wall panels, mirrors and a variety of bowls as well as coasters.

"I still love that moment of anticipation when I lift the kiln lid," says Debbie. "Will it be followed by delight or despair?"

"Reflection" continues until 3rd September.
Posted by Green Tree Gal at 13:04 No comments: